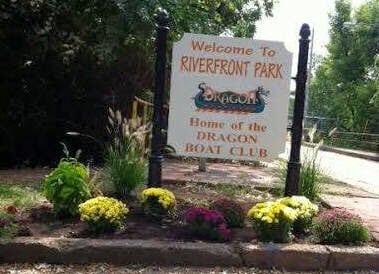 It was raining at 7:30 am on Friday July 14th when two teams, Norristown Public Works and Pennsylvania American Water Company, went to work on the neglected Riverfront Park with two dozen men and their machines in an incredibly organized event, orchestrated by Norristown Fire Chief Thomas O’Donnell. Four backhoes, six dumb trucks, one bobcat, and a brush-hog worked all morning to turn the County Seat’s Park back into it’s 1990’s welcoming charm and safety.

The Water Company bosses wielded chainsaws on invasive non-native trees, then dragged the kindling to the chipper which was donated by Norris Sales Company. AJR Environmental specialists donated and operated the brush-hog like a surgeon, exposing a beautiful bedrock escarpment: a geological teaching aid for everyone who visits the park.

The brand new lights came into view as the Norristown Public Works operator artistically trimmed away all their obstructions from the stage of his bucket truck. That night its was so bright, you could play chess in the parking lot.

For four hours Norristown Public Works and Pennsylvania American Water Company filled the dump trucks with debris, operating a continual caravan of clean-up, fill, and empty, all the time in the rain.

I will be posting the video on “You Tube” showing the difference before and after the work was done. Thanks to all those who participated and/or donated to this much needed enrichment of Norristown’s Riverfront Park. It is now clean, safe, and well-lit to be enjoyed by all.